Are you new to climbing? Were there some questions you thought about but didn’t ask at your introductory lesson?

Every pro climber got their start at some point and wondered the same things you probably are.

Here are some answers to popular questions asked by folks new to the indoor climbing scene.

ROCK DOC MOBILE CLIMBING CLINIC 2018 Saturday November 24th 10am-12pm Do you have a climbing-related injury and need advice on how to manage it? Do you want to improve your climbing ability but need advice on how to train effectively? Sign up at the front desk for this free Q&A Session and Clinic with Kacy Wilson and The Rock Doc, our resident climbing medicine expert! Space is limited, sign up at front desk. . . #joerockheads #climbinggym #toronto #climbing

Whatever you find comfortable to move in.

Some folks like yoga-style Lycra attire; others prefer a loose, baggy style. As long as you can move your arms and legs freely, and you can see your hands and feet while you climb, you should be good to go.

2. Wouldn’t it be better to wear gloves?

Gloves may protect your skin, but they prevent you from properly feeling the holds. For climbing, feeling the friction and the details of the holds helps you better “stick” to them. Your skin will be sore at first but over time it will toughen up and develop small callouses so it won’t hurt anymore.

There is one exception to the no-glove rule; many folks who do a specialized kind of climbing called “crack climbing” wear partial gloves. These type of gloves keep the fingers free for dexterity and feeling the rock but protect the skin on the backs of the hands – particularly the knuckles – from getting scraped up as hands are repeatedly “jammed” into cracks. 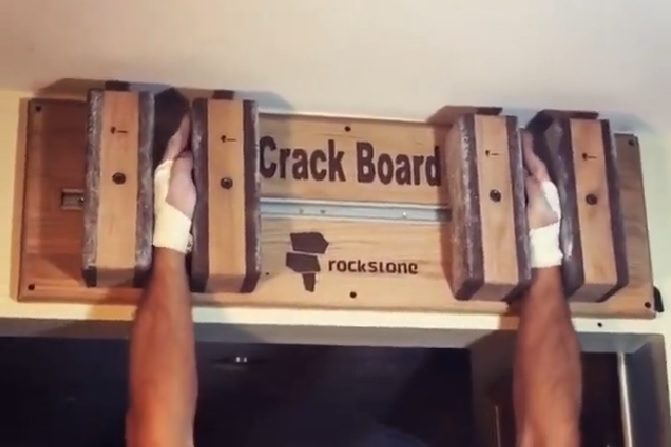 Climbing chalk, like gymnasts’ chalk, is a white powder made of magnesium carbonate designed to absorb sweat so there’s more friction between your hands and the holds. You don’t want slippery hands when climbing and excess moisture can leave the holds slimy for the next climber. Ugh.

However, if you use too much, chalk can get caked on to your hands, which reduces friction and leaves holds grimy. Over-chalking can also create clouds of the white powder that people have to breath in. So be conservative and “chalk up” just enough to keep your hands dry. The amount will vary from person to person.

4. What does brushing do?

You may have seen people at the gym take out little brushes (toothbrush- to hairbrush-size) and brushing the holds on the wall before climbing. These folks are brushing off slime and grime built up on holds over time from climber sweat and excess chalk (see Q3). Brushing holds gives them more friction and friction means you can stick to them better (see Q2). 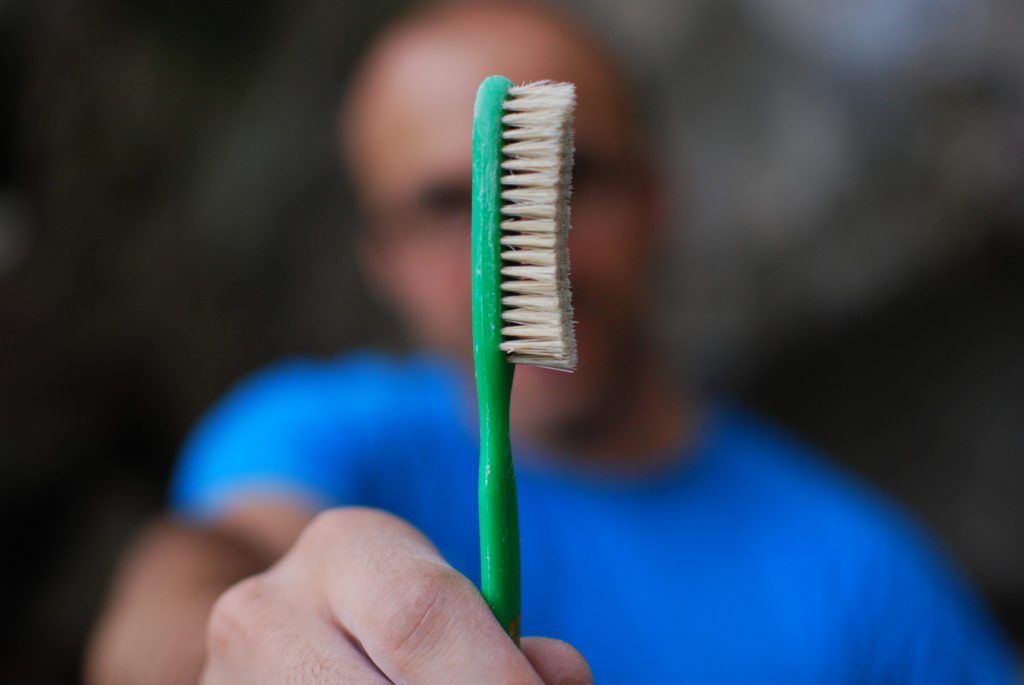 5. What is the coloured tape for?

Tape points out the holds on a climb, and sometimes how hard the climb is.

Many climbing gyms designate boulder problems and routes by coloured tape. Each hand and foot hold will have a piece of coloured tape beside it so the climbers know which holds belong to the problem or route they are trying. Sometimes, instead of tape, the holds themselves will all be the same colour. Designating routes by colour is especially helpful when there are routes that overlap each other on the wall.

Sometimes the colour of the tape (or holds) also indicates the difficulty of the problem or route. If this is the case, there will be a legend somewhere in the gym informing climbers of the grade or grade range that the different colours represent.

6. What do the numbers mean?

They tell you how hard the climb is.

The number assigned to a climb indicates its grade of difficulty. For routes, the grade will be a decimal number that always begins with 5. The number after the decimal increases with difficulty. Therefore, easier routes are graded between 5.4 and 5.7 and harder routes in the gym are in the range of 5.11-5.13.

7. How should my shoes fit?

You don’t want your feet to move around in your shoes because good climbing requires precise foot placements, and for that you need to feel the details, such as little edges, on the foot holds. On the other hand, if your shoes are too tight, they will get numb and you won’t feel anything.

Your shoes should definitely feel tighter than your regular street footwear. Thus, it is quite common for climbers to take off their shoes on regular intervals, even as often as in between climbs, to give their feet a break. (Note that many gyms require flip-flops or socks if removing shoes).

As soon as you figure out how awesome climbing is!

More seriously, though… it will take 7-10 visits to the gym before you will have spent the cost of purchasing your own gear on rental fees. For bouldering, you only need entry-level shoes and a chalk bag, which costs in the range of $100-$130. If you’re going to climb routes, you’ll need a harness and belay device too, which adds another $80-$180.

So, perhaps rent for the first few times and if you’re still stoked, it’s a good time to buy your own gear. Take into consideration that you are probably more likely to go if you invest in the gear and deterred if you have to pay the extra rental fee every time you want to go… 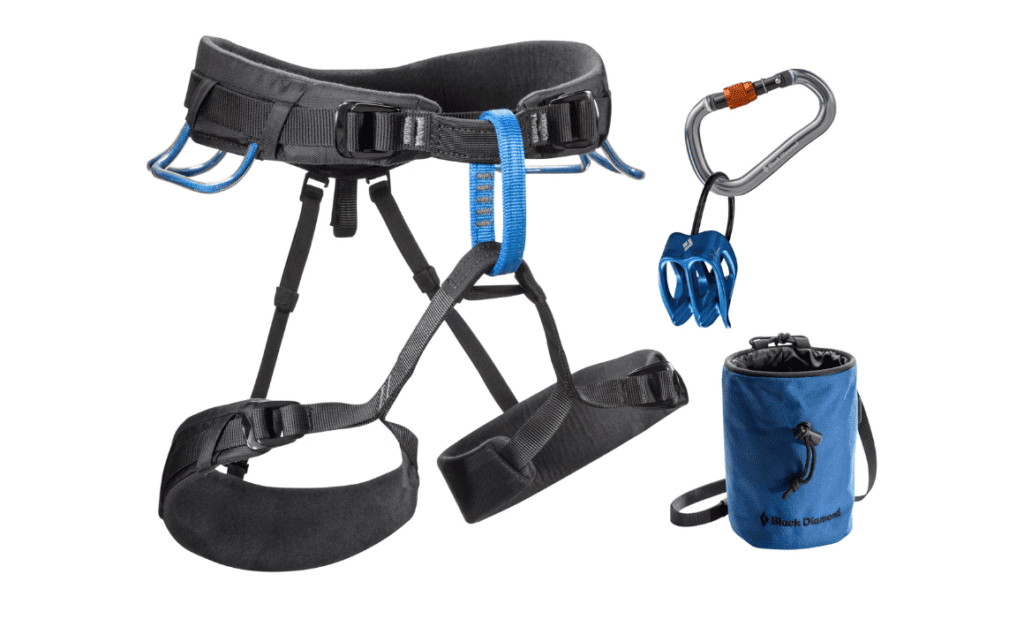 When there’s a reasonable gap.

Climbing at a crowded bouldering wall can be intimidating; there are no obvious line-ups as there often are at roped climbs. The timing of when to go on the wall is a fine balance between patience and assertiveness. Think of it like a conversation; don’t interrupt but do speak up in the gaps (or someone else may talk all night).

Other pointers: Don’t stand too far away from the wall or no one will know that you are waiting to try the problem. Don’t spend too long on the wall when it’s your turn. Give one solid attempt when others are waiting; if you slip off near the beginning, it’s probably cool to give it another go right away. Otherwise, it should follow a kind of natural rotation of attempts by those working the problem.

In the beginning, just climb.

A typical remark when people start climbing is how tired and sore they get, particularly in the forearms. Even folks who are physically strong and good at other sports are likely to feel weak when they first start climbing. This is normal because, as with any new sport, there is a technical learning curve and your body has to get used to using new muscles in a new way. The best way to get stronger for climbing, at first, is to climb.

You will notice improvement as you strengthen those climbing-specific muscles and also as your technique improves because when you’re more efficient at moving on the wall you conserve energy. You may consider taking a technique lesson for this reason.

Many climbing gyms these days have an area with equipment you would see at a cross-fit or weight lifting gym, and some climbing-specific training equipment. These may be useful down the road.

A post shared by Gripped Magazine Comps (@grippedmagazinecomps) on Oct 9, 2018 at 2:37pm PDT

Are you new to climbing? Were there some questions you thought about but didn’t ask at your introductory lesson? Every pro climber got their start at some point and wondered the same things you […]